Home Article Bryan is FIVE!
Facebook
Twitter
LINE
Pinterest
ReddIt
WhatsApp
Bryan turned 5 years old on 20 August 2011. What wonderful five years it has been. And because Bryan was our first, somehow we recall more of his milestones and what VT & I went through as first time parents. From his no-sleep days (Jazz knows all about this!!!) to the accident, to being a kor kor to not one, but TWO di-dis. Bryan is a wonderful brother. He is quick to protect them when we are away from home and proudly introduces his brothers to anyone we meet, including broadcasting of their full names. Of course it’s a different story at home. Like any other boys, the fights revolve around toys. But they know that they have to share and take turns. It gets better everyday.

The first thing everyone comments on when they see him, is how big Bryan is physically. Yup, this boy of mine enjoys food and milk and anything consumable – including medicine! He has the potential to be a Jamie Oliver/Anthony Bourdain me thinks. He enjoys helping me bake as well and has mastered the art of breaking eggs without any shells falling in. Bryan’s weight stands at 28kg today and 1.22 metres tall.

At 5, Bryan has a bit of a photographic memory. He remembers images and visuals very well (typical male) and as such, is able to rattle off the 200+ chinese characters that he’d learned from school. His teacher was surprised and assumed that he was rote learning so she tested him by pointing at characters randomly and not in the usual order the kids were taught in. He got them all correct. I hope this trait continues so that he can cope effortlessly in the chinese K2 stream next year, and primary school the year after.

Bryan is a true gentleman. At his birthday party, when the music stopped during a round of musical chair, instead of rushing for a seat, he kindly offered a little girl, the seat. Best thing was that the little girl was not even in the game in the first instance! I am proud to have such a compassionate little boy. He is also the first to comfort me when I am sick or in pain, and also the first to share hugs and kisses when I am home from work.

He is still loving his milk bottle. He was supposed to quit drinking milk from the bottle when he turned 5, but on his birthday, he declared that he will quit only when he was FIFTY! ho ho ho!! I’m easy and won’t push it till he is ready. No crime done. Let him indulge. Have you seen an 18 year old drinking from a milk bottle? Same with sleeping without diapers. I’m getting desparate only because he is out-growing the XXL MamyPoko pants. I guess my next step is adult diapers. We tried a couple of nights but he kept wetting the bed. Again, no rush. When he is ready.

Bryan, Mummy & Papa, Brandon and Bradley love you to bits. Yes, even Brandon. Every day after we drop you off at school, Brandon says, “I miss kor kor”. So he really does enjoy your company even though he fights with you. Do remember how much fun you both have when acting out the Ben10 aliens or the times you both cycle around the house while ringing the bells. And the cozyness and the warmth of sleeping next to each other. Bradley is still small – that is why he gets to sleep with me on my bed. Rest assured, Brad will be joining you and Brandon soon on your beds! Happy 5th birthday, my dear boy. You are a very good tai cai, and we couldn’t be more proud to call you our son.

Trick or Treat! 6 Ideas to Celebrate Halloween at Home

Learning and Kids: How to Determine Your Child’s Learning Style 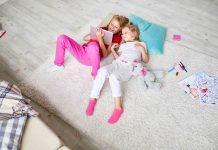 6 Signs that Your Child is Coping During Unprecedented Times

Learning and Kids: How to Determine Your Child’s Learning Style

Trick or Treat! 6 Ideas to Celebrate Halloween at Home

Tired of Waiting? Tips for Pregnant Moms to Speed Up Labor

6 Signs that Your Child is Coping During Unprecedented Times

Coping With Toddlers Who Are Fussy Eaters