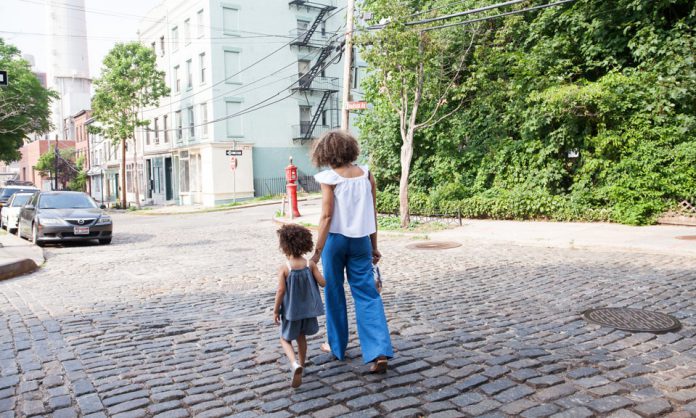 Maybe I was meant to be a stay-at-home wife and mother. I grew up with a mom who was always there, who held my hand, kissed my pain away, taught me how to bake. As an adult, I went corporate for a while but waking up early and rushing off to work was such a burden for me to do. Yet when the babies came, sleepless nights were manageable, and having my hands full with feeding, bathing, nursing, soothing, and singing lullabies and the ABCs gave me so much joy. I knew then that motherhood was my career. It helped a lot that my husband was also raised by a stay-at-home mom, so my giving up a good paying job was quite an easy decision to make.

I initially fashioned my parenting style from my own mom but later on, I tweaked here and there, adopted some wise suggestions from my readings and from other moms, and also picked up tried and tested maneuvers from my mother-in-law. Being with my kids 24/7 allowed me to nurture what nature had equipped them with. I made sure they were fed, kept clean and taught simple do’s and don’t’s. We played games and sang songs. I read to them stories and rhymes I grew up with. What I couldn’t find in books, I recited from my heart. Gadgets were unheard of then and my husband and I did not expose them to the TV. They learned to love books and enjoy reading. (Case in point: When our eldest son who was then just over 2 years old was rushed to the ER for a major gash on his head, his cries of pain suddenly turned into bursts of “Old King Cole” and “Georgie Porgie Pudding and Pie.” Maybe this brought him some comfort, as if I was just right there beside him, although I was sitting nervously at home.) We were happier to see our books tattered and torn from overuse than to have them sitting in perfect shape on the bookshelves.

My focus was more on teaching and encouraging my kids to say, do, and think what was right and good. Have fun but: Respect others. Play fair. Pray. Be honest. Don’t hurt. Share. Be happy. Say please and thank you. Going against these rules was immediately wrong and bad. While doing all this was easy for them to do in our presence, playing with other kids challenged them. Expectedly, there would be some shoving and grabbing, but a mere look or a gentle reminder would put them back in place and they would all have fun again. They learned to share, to wait for their turn, and to lead or be led. Their friends loved coming over to our house rather than they going to their friends’ houses.

For a considerably long while, things went smooth except for some scrapes and bruises along the way.

At the lower grade school levels, I felt I was still “in control.” They did school work diligently under my guidance. We had fun doing research with the help of the encyclopedias my husband had saved and scraped for. The kids would find other interesting topics as they skimmed the pages to look for what they needed to read on. We did maths long hand. We experimented. They caught frogs with their dad. We went to see the Banawe Rice Terraces up close. The Mayon Volcano was our friend, having lived in the area for a few years. I patiently prepared reviewers and practice exams for them every quarter (which they passed on to their classmates as well). Projects? Their dad was there with his carpentry tool set. Long distance calls happened when I was away and their dad had to supervise to their nightly study periods. The end of the school year found us in bookstores getting new books for them to read during summer break. Learning was such a family thing.

And then my kids grew up and grew out of the comforts of home.

Chemistry, physics, and calculus got the better of me, as much as new friends, new interests and new gadgets rendered me irrelevant. While it was a difficult time for my children, puberty and all, it was also a difficult time for me. I thought my mom-career had ended. They were spending more time with friends and classmates, doing projects and reports with them, not wanting me to join them on field trips, and preferring school lunches over home cooked meals. But I must admit, there were those “happy mom” moments like when they would sit me down and tell me about their crushes, or when they’d bring a classmate to me while I waited in school, to sew the button that had come loose on that classmate’s uniform.

So there, I did let go, though not without some heartaches and misgivings. Maybe it was the computer that convinced me that things were different now.

My children are millenials – not because they fit whatever stereotypes or notions many of us have regarding millenials, but primarily because they are part of that generation: Generation Y. A lot say millenials are laid back, are not content with jobs that simply pay the bills, seem to put on hold having their own kids, prioritize traveling which means they don’t save as much as they should, and are updated with regard to the latest technology. Being a mother of three millenials, I must say that I do agree that my kids fit some of these notions. They seem to be so smart at just about anything because any information they need is only one click away. They used to think the world of me because I had answers to almost anything. Now, I am the one asking all the questions! They can shift from cell phone to iPads to the latest computer model with such great ease, as if they’d been doing it all their lives. They pack up and go just like that. They patronize coffee shops, fusion food, healthy meals-to-order. They work out, go to the gym, and climb mountains.

My eldest son is a business analyst who designs systems for various clients. Technology is his game and his knowledge thereof vis-a-vis the field of human resources leaves me in awe. Thirty years old and single, he has invested in a condo and is already building up his retirement fund. His job takes him abroad every now and then, yet he doesn’t mind commuting when he has to. He always finds time to go to the gym and insists on eating healthy.

My second son may be a very busy lawyer millenial but he always puts family first, shares in the responsibilities of child care, willingly changes his daughter’s diapers, gets up in the middle of the night to soothe her to sleep to give his lawyer wife more time to sleep too. They have date nights while their baby stays home with her grandparents. They go on outings, just the three of them, sans nanny. A very young family, yet able to enjoy little pleasures unheard of during our time.

My youngest, a resident-doctor millenial, is so passionate and dedicated to her career. Always wanting to learn, she uses technology for her various research papers while flying through the stringent demands of residency. Hospital work may keep her literally on her toes for long hours (she is a major force in organizing events for their department, among other things), but she is never out of touch with fashion, books, movies, and baking recipes! Thanks to the Internet.

Yes, they’re a million miles away from what I am – I, who was also raised by a stay-at-home mom and who experienced just about the same love and guidance that I gave them. I’m just down here somewhere while they’re soaring high up there. But what gives me the biggest comfort and joy is that they still come and kiss us goodnight (no matter how late they get home), they love their siblings despite all the ribbing, and they’d go back to have their tickets checked if the train personnel overlooked them.

“Better to lose points on earth and gain them in heaven.” I used to say this when their grade school teachers erred in checking their tests papers, giving a score for a wrong answer. And I required them to have their scores adjusted, much to the surprise and appreciation of their teachers for their honesty. It seems this seemingly little reminder has become a part of their lives, notwithstanding technology and all. And that’s not bad.

Not bad at all.

Maricar Cabrera is stay-at-home mom who has raised three compassionate and responsible adults. She now takes great pride in the fruits of her child-rearing career. Her biggest achievements are her children who excel in their chosen fields. She can now do what she had to give up in the earlier years: sit back and read a book, travel, shop, and do volunteer work. And spoil her granddaughter to pieces.