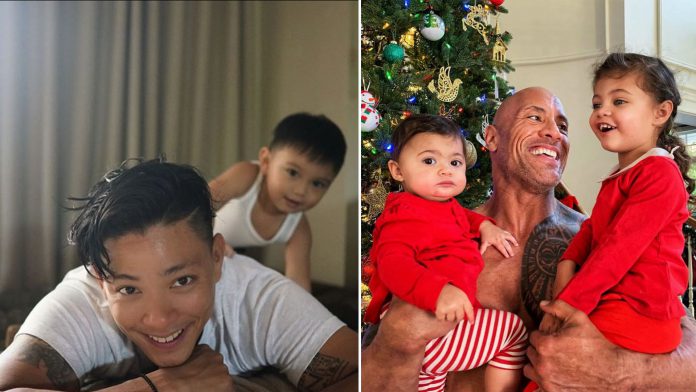 When it comes to parenting, the common notion is that dads take the back seat, and it’s the moms who get their hands dirty. But these celebrity dads show us how they can be actively involved in raising their children despite their busy schedules and their on-screen macho image. I asked some moms (and dads too) who their favorite celebrity dads are, and here’s what came up!

Foo Fighters Rockstar, Dave Grohl shows us how one can live the head banging, long-haired lifestyle while still being a great father to his daughters. In one of his interviews, he said “When you have a kid, it opens up all these new channels of emotion and perspective”. He also got his inspiration for his two-part documentary, Play, from his kids, which is about how kids are taught music.

I'd rather have one person who loves me with all their heart, than a million people who just act like they do.

Who would not know this tall man who is not only making his mark in the hard court, but also on the Internet? Just by looking at his Instagram account @dougkramer (which has 1.3M followers by the way!), you can already tell how cool and sweet he is not only as a dad but also as a husband to Cheska. You’ll see photos and videos of him playing board games with his family, dating his kids, going on vacation with them, or simply just goofing around!

I seriously have not laughed this much in a looooong time!! I lost it with Scarlett's reaction when she saw her face!! 😂😂😂 #TawaSabayUtot 🤣🤣🤣

This is one tough guy who’s taking fatherhood seriously. Dwayne Johnson (@therock) is a father to three lovely girls. When his daughter Jasmine was born in 2016, he posted a photo with the caption, “Give me the strength to be a better man today than yesterday. If I can accomplish that, then I’d have a good shot at being a great father.” Now do I hear you say, “Awwww”? Yes, and it doesn’t stop there. He continues to be ever supportive to all his daughters, including his teenager Simone. Though his Instagram feed is full of all sorts of stuff, like his workouts, projects and movies, you’ll never miss those colorful and lively ones that are of him and his kids – on Christmas morning, blowing candles on his birthday cake, hunting for easter eggs, and more.

Daddy’s arms. I ain’t gonna be able to hold ‘em like this forever, so you better believe I snatch these cookies and love ‘em up every moment I can. Plus, I know there’s gonna come a day where in daddy’s arms is the last place they want to be. Baby Tiana Gia is already there with the “help me” look on her face 😂🤦🏽‍♂️ Can’t guarantee I’ll love and protect all my daughters for the rest of their lives, but I can guarantee I will for the rest of mine. #xmas #daddysarms #helpme

Here’s another toughie dad many women adore! Just by doing a quick search of his name, you’ll see many photos and articles not just on his role as Thor, but also how he is nailing it as a great dad. In his @chrishemsworth and his partner’s @elsapatakyconfidential Instagram accounts, you’ll find many of these picture-perfect moments camping, fishing, going on the set together and even getting his hands dirty preparing snacks or even a birthday cake!

Last but not least is our very own local artist and fitness buff, Drew Arellano. Who would ever forget his Instagram stories videos and photos that went viral, when he got off the van in the middle of the heavy traffic in EDSA to literally run home! He wanted to make sure he catches his son Primo before he goes to bed, and when he finally made it, the delight in his son’s reaction is priceless! Oh, the things you do for your kid!